Where we came from and who are we now?

The actual incorporation date of The Peoples Bank was 1920.

However, there have been banking services available in Gambier since 1898 under names such as The Gambier Saving Bank Co. and The Banking Co. The Bank was incorporated to serve Kenyon College students, local merchants and local residents that wanted to do banking closer to home than the local county seat, Mount Vernon five miles away.

The Peoples Bank of Gambier, which is a small, independent, Community Bank with FDIC insurance, was originally capitalized with $25,000 and 95 shareholders.  Today, while still comparatively small at $55 million, the Bank incorporates a full range of services and competes with much larger banks while keeping a local presence.  The Bank is the only locally owned and operated community bank in Knox County. 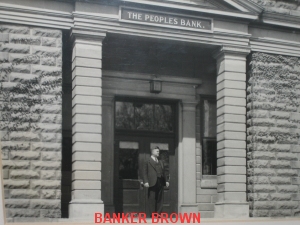 J. Ray Brown was hired as bookkeeper in 1923 and promoted to Cashier which is an older name for Ray Brown CEO. He held this position until 1967. He was known as “Banker Brown” and was well known for taking some unusual collateral such as a typewriter from a student.  Some of the Presidents of the board include Charlie Shrontz, Clarence Colwill, Alva Harris and local grocer, Jim Hayes.  Jim and his wife were also owners of "The Village Inn" restaurant in Gambier.  Of course, Margaret Kunkel was CEO and later President for many years and she kept the persona of The Peoples Bank being, “For the People” alive.  Margaret was replaced by President Joan Jones but Margaret stayed on the board until her death in 2004. In anticipation of Joan's retirement in 2009, Paul G. Wreede was named President.  Joan remains as President of the Bank's holding company.  In anticipation of Paul's retirement in 2017, Alicia Freeman was named President.  Alicia’s focus will be servicing the customers and community as she has in prior community banking positions.

While bank robberies are not usually anything bankers want to focus on, one claim to fame the bank holds is that in 1933, the bank was robbed supposedly by members of the "Dillinger Gang."  A 2005 story authored and researched by Kenyon College staff is available on the internet.

Another claim to fame is that we have had, through the college, many famous, near famous or soon to be famous customers.  While privacy issues prohibit naming these customers, we think we’re safe in reporting that we have a thank you letter from actor Paul Newman framed in our board room!

In 1998, in order to meet modern banking needs,  after a bit of discussion in the community and architectural compromise, the bank built a new main office building on Wiggin Street and sold the old long, narrow stone building to Kenyon. It is now commonly known as “The Old Bank Building”, and is utilized for various functions by the college.

Late in 2001, the bank opened its first and only branch on Upper Gilchrist Road in Mount Vernon.  It was felt that this was our avenue to grow the bank and serve our customers more efficiently and has been successful.  It has grown to over $15 million in total deposits.

The bank has continuously updated its technology and went to imaging and phone banking and now to on-line banking in order to remain competitive. The banking environment has changed at lightning speed in recent years and while the bank is committed to using all the  up-to-date features, we still concentrate on our motto – “Small Enough to Know You, Large Enough to Serve You.”  While many large regional banks call themselves community banks, we are committed to being a Real Community Bank.

The Bank has always been directed by a Board made up of people that live in and have direct connections to our community.  Almost all of our officers and employees have Gambier or Knox County addresses.  So, it is clear that along with honoring our past, our interests are in the future health and prosperity of our community.

We realize you as customers have choices as to where you put your money and we would be honored if you have or plan to select The Peoples Bank to meet your financial needs.  Each and every one of our staff pledge to do their personal best to make your time with our bank the best you’ve experienced.  To maintain our reputation of Superior, Outstanding Service, please e-mail us at This email address is being protected from spambots. You need JavaScript enabled to view it. with any issues you may run into in the future.

We want our history to be reflected in your future.